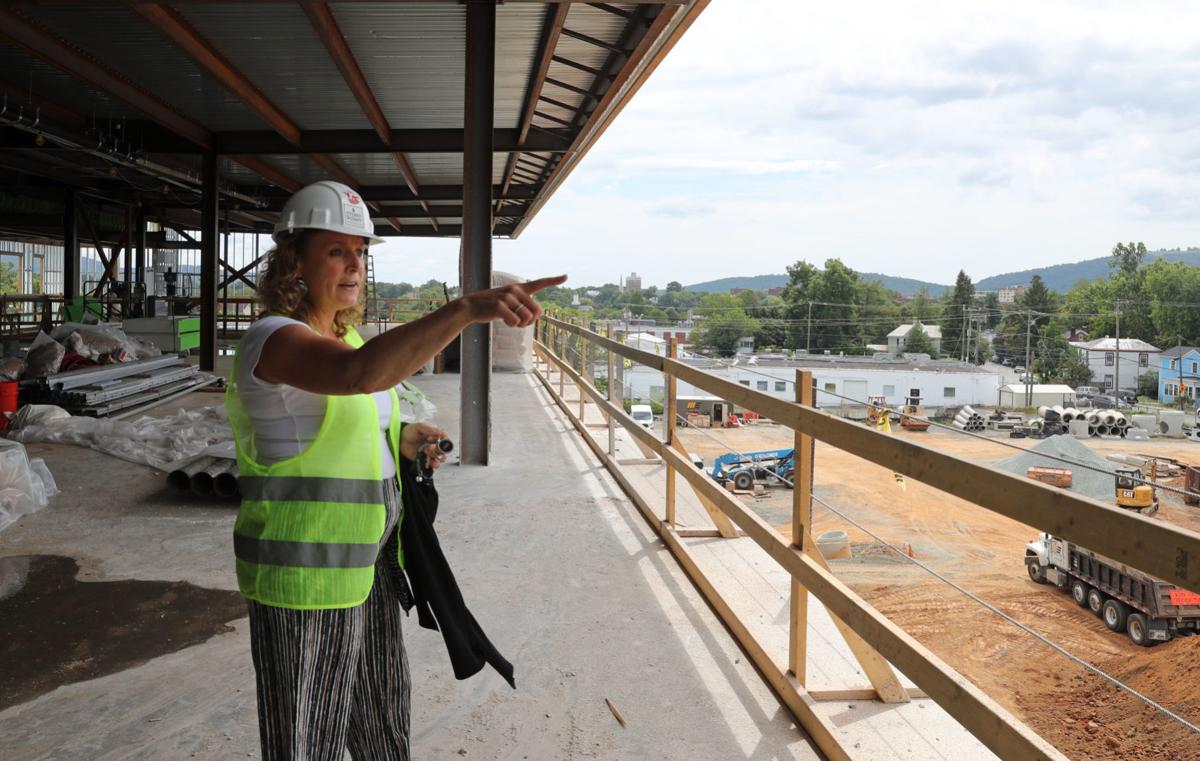 From brick facades and columnar treatments, Charlottesville is a city with its architecture firmly rooted in its past — and developers of a Preston Avenue multi-use property are betting the past will lead to success in the future.

Stony Point Design/Build’s redevelopment of the Monticello Dairy is turning the thick brick walls and familiar visage of the old industrial complex into the Dairy Market, more than 30,000 square feet of retail and restaurant space with 50,000 square feet of office space and an estimated 180 apartments.

The market is the first phase of Dairy Central, a four-phase project planned for the site at the corner of Preston Avenue, Grady Avenue and 10th Street Northwest. It’s expected to open next year.

The 4.5-acre property eventually will include 300,000 square feet of additional office, retail and residential space.

“On the outside, it looks pretty similar to what it did in 1937 when it first opened as a dairy. The two-story section and the wings next to it were built in 1937 and a garage and addition were added in the 1940s,” said Chris Henry, president, co-founder and general manager of Stony Point Design/Build. “The property is reviewed by the city’s Board of Architectural Review and we have to give credit to the board for really working with us to make this a successful project.”

Success is the operative word. More than half of the first phase office space is spoken for, but Henry declined to say which organizations and companies agreed to rent office space because the contracts are not finalized.

The redeveloped building includes a full-width food hall planned for a variety of local restaurateurs and a Starr Hill brew pub. Including the brewer, five businesses have signed up to occupy the food hall, which runs the full width of the one-square-block facility.

The other businesses that will occupy food hall stalls are local outfits Angelic’s Kitchen, Chimm Street and Take it Away Sandwich Shop, as well as Brooklyn, New York-based https://elevacoffee.comEleva Coffee.

“The food stalls will be very individual and reflect the businesses so they won’t all look alike. There’s nothing that says the food stall can’t be decorated differently or have chalkboard paint on a wall or have seating for customers,” said Jodi Mills, director of sales and marketing for Stony Point Design/Build. “The idea is to provide a retail and food market to serve the offices, the residents, the public and the neighborhood. There’s a basement space being developed into a community space.”

Mills said the dairy’s old windows are being reconstructed, and bricks taken down in remodeling will be reused.

The Monticello Dairy building has had its ups and down. From the late 1930s through the 1960s, the building housed production and distribution of Monticello Dairy milk, butter and ice cream. It was a popular place for area residents to meet and eat frozen treats. In this time, the company expanded, buying smaller dairies in Farmville and Culpeper.

In the 1970s, larger dairies squeezed smaller ones out of the industry and in 1984, the family-owned operation was sold to the Shenandoah’s Pride dairy.

Within a year, Shenandoah’s Pride closed its dairy operations in Charlottesville. The company laid off most of its local employees and put the property on the market.

For the next two decades, the old dairy housed a variety of retail and industrial businesses, including restaurants, breweries, a locally owned battery retailer, a truck/transfer company, martial arts studio, a music venue, an indoor paintball park and a recording studio.

Over the years, the building went from looking iconic to seemingly decrepit.

“I’m sure there were people who thought it should be torn down and I thought that once or twice during construction” Henry laughed. “We were looking for our next project, and the size of the lot and the history of the building and its location really ticked all of our boxes. It’s urban. It has walkability. It’s close to the University of Virginia. It’s near downtown and you can get on U.S. 250 and access the highway quickly.”

Two-foot-thick brick walls, concrete flooring and state-of-the-art construction for Monticello Dairy’s time meant the building’s bones were strong, even if it needed to be torn down internally to make the new plans fit the old footprint.

“On the inside, it needed a lot of work and a lot of love,” Henry said. “It’s really different inside than what people may remember. We removed a lot of old junk and hazardous materials and found a lot of different things we really didn’t expect.”

One was thick cork-layered concrete flooring in some locations.

“The building was built before the technology of refrigeration so the dairy relied on ice, and we discovered some areas had concrete floors that were separated by layers of cork and that kept rooms cold,” Henry said.

Located in a nook of the building was the Crystalphonic recording studio, which opened in 2002.

“We found an old recording studio in there and there were some thick and heavy doors used to soundproof the studio. One of the crew mentioned that this would have been a state-of-the-art studio,” Henry said.

“We also found some historical pictures from the 1960s of a giant plastic cow that used to be in front of the dairy, so we’re planning a giant mural that references the cow,” he said.

Henry said the entire project is being developed with input from nearby community members and that he will continue seek their feedback.

“Dairy Central will be a new development in and of itself, but it will also be respectful of the nearby 10th and Page neighborhood,” he said. “We’ll have a courtyard that faces the neighborhood that [the public] can use, and there will be a common room [that can be used] for meetings and events. All of our parking will be underground so we don’t have a large parking [ramp] looming over [the neighborhood]. Time will show us how successful we are, but it is important for us to work with [the community].”