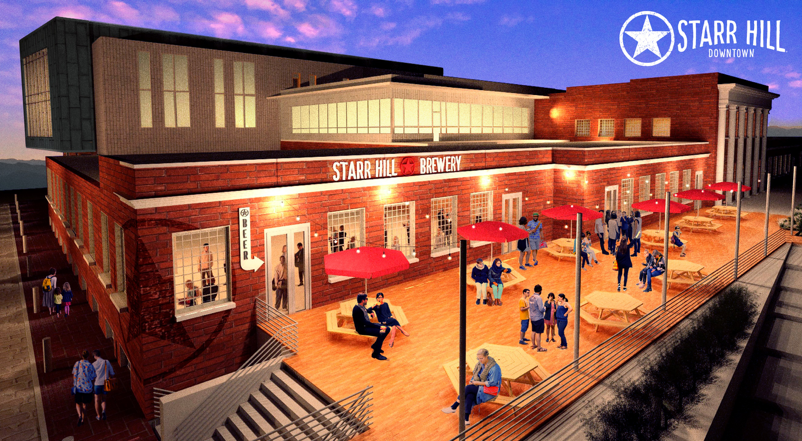 CHARLOTTESVILLE, VA – (June 26, 2019) Starr Hill Brewery is proud to announce its return to downtown Charlottesville in 2020 with the opening of Starr Hill Downtown.   The new pilot brewery and tap room will be a cornerstone of the new Dairy Market project on Preston Avenue.  Two decades after opening its Brewery and Music Hall in its namesake neighborhood, Starr Hill will return to its home in Charlottesville the Spring of 2020. The original Starr Hill Brewery and Music Hall opened in 1999 on West Main Street where national bands such as My Morning Jacket, Kenny Chesney and the Avett Brothers performed.  Starr Hill Music Hall closed in 2007 shortly after the brewery’s move into the former ConAgra Frozen Food Plant in Crozet, which remains its primary production facility.  As Starr Hill celebrates its 20th anniversary in 2019, the opening of its newest location in the Dairy Market will mark a homecoming to the area where the brewery began its journey.

Starr Hill Downtown will be an anchor tenant in the Dairy Market project being managed by Stony Point Design/Build.  The Dairy building was constructed in 1937 with the Monticello Dairy as the original tenant.  The Dairy Market will include food stalls, restaurants and retail with an open market concept that will feature the best of Charlottesville’s local food offerings.  Starr Hill Downtown will occupy 4,200 square feet on the northeast corner of the Dairy building with an additional 1,000 square foot patio.  A 5-barrel brewing system will allow Starr Hill to further experiment with new, small batch beers while still offering customers an opportunity to drink the brewery’s core, seasonal and sour offerings.

Information about hiring positions and official opening events will be posted at a later date on www.StarrHill.com. Follow updates on social media via Starr Hill’s Downtown accounts: Facebook.com/StarrHillCville, Twitter: @StarrHillCville and Instagram: @StarrHillCville.

Born in a Charlottesville music hall in 1999, Starr Hill is an independent, regional craft brewery founded out of a passion for great beer and live music.  Headquartered in Crozet, VA, Starr Hill Brewery is among the most award-winning craft breweries on the East Coast. Fans can also visit the Pilot Brewery & Side Stage in Roanoke, VA, and the new Starr Hill Beer Hall & Rooftop in Richmond, VA, scheduled to open Fall 2019. Please visit www.StarrHill.com for more information.

Dairy Market is bringing the national Food Hall revolution to Charlottesville while reviving a cherished community treasure located right in the heart of the city.   Dairy Market will feature a carefully curated selection of Virginia’s leading purveyors, culinary talents, and artisans side by side in the 14 market stalls.  Please visit www.Dairymarketcville.com for more information.